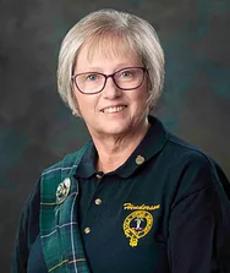 Leon Hicks has been President of the Clan Henderson Society since 2018 and will serve in that position until the end of 2022. He has served as a Regional Commissioner of the Mid East Region, Vice President of Operations, and as President of the Society. He has been an active Member of the Scottish Community and Clan Henderson Society since 1997. He is also the Chairman of the Board of Directors and Chief Executive Officer of the Cape Fear Scottish Immigration Memorial Fund, a not-for-profit corporation established to promote the history of earliest Scottish settlers to North Carolina in general, and the Cape Fear Region of North Carolina in particular. He is also a member of the North Carolina St. Andrew Society of North Carolina.

Mr. Hicks is a retired System’s Engineer from Raytheon Corporation. He is currently serving as a science advisor to Meridien Corporation. Prior to his retire he has been employed as a Scientist/Engineer with Hughes Aircraft Corporation, Space Systems Architect with the Scientific and Technical Analysis Corporation, and as Analyst with the Central Intelligence Agency.

He currently resides in Southport/Oak Island North Carolina with his wife Ann Henderson Hicks. They have four sons, and seven grandchildren. He enjoys the beach life, fly fishing, travel, the study of history and geography, and most of all spending time with the family. 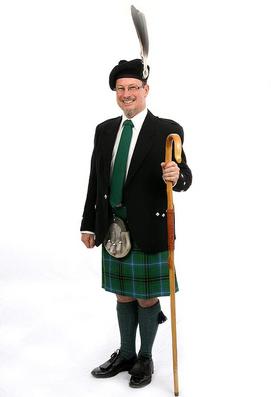 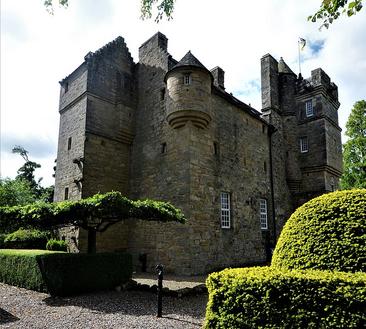 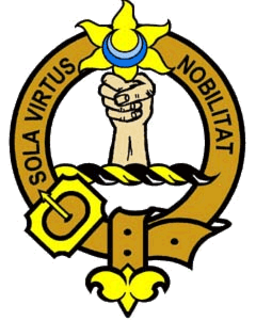 He has two children. His daughter Claire, (Bachelors of Communications (Film & Television)) graduated from Griffith University with the Dean’s Award for high achievement and now works for BBC in London. His son, Iain, is working in Japan and is a graduate of the University of Queensland.

Alistair is interested in Scottish history, and is a member of the Heraldry Society of Scotland, the Scottish Genealogy Society, and the Genealogical Society of Queensland.  He is also a Fellow of the Society of Antiquaries of Scotland.

Chief of the Arms and Names of Henderson

David was born in Mecklenburg County, NC where his family dates back eight generations to Cairns Henderson born in Fifeshire, Scotland in 1724 and came to America.  Cairns in turn traces back five generations to Sir John Henderson of Fordell.

David is member of Founding Families of Mecklenburg and a Fellow of the Society of Antiquaries of Scotland.

HERITAGE
The sons of Henry (MacEanruig) are a family as old as any clan in the Highlands. In modern times, Clan Henderson traces lineage through the Chief of the Name and Arms of Henderson, Alistair of Fordell. However, in times more distant Henderson’s can claim descent from a King of the Picts and down through five unique bloodlines evolving from the regions of Caithness, Fordell, Glencoe, Shetlands/Liddesdale and Ulster. Henderson’s from the Glencoe region have strong ties to the MacDonald Clan and were renowned as pipers and bodyguards to the Glencoe MacDonald Chief (MacIan). In 1692 when the Massacre of Glencoe took place, it is said that the chief's personal attendant and piper, Big Henderson of the Chanters, was among those killed. Henderson’s from the Caithness region have ties to the Clan Gunn.

The Clan Henderson Society of the United States and Canada first began July 1985 at Grandfather Mountain Highland Games under the guidance of the Council of Scottish Clans and Associations, Inc. It was authorized to formally organize on 22 September 1986 by the Chief of the Name and Arms of Henderson.

WAR CRY
“The Henderson’s Are Here!” 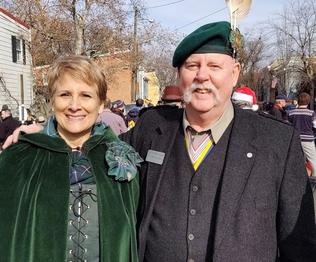 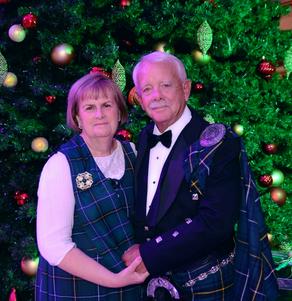 I came to Clan Henderson by way of marriage to Bruce Henderson.  Even though my heritage is English (maiden name Baseley) and German, I've always been interested in my lineage and family tree. We joined CHS in 2014, and I became Regional Commissioner in 2019. Bruce & I took our retirement trip to Scotland, and that really piqued my interest in Scottish culture. We've also toured Scotland with Clan Henderson Society, getting to know our kinsmen and Clan leaders. One of the highlights of the trip was to be able to meet our Clan Chieftan, Alastair of Fordell and tour Fordell Castle and grounds, and to be an Honored Clan at the Edinburgh Tattoo. What an enlightening and exciting experience that was!

I am a retired Accounting Tech from the Veterans Administration at Fort Harrison, MT. Prior to that, I was with the Forest Service and Soil Conservation Service. I had a break in service and had a bakery in Dillon, MT with my mom-in-law. It was a great experience and the citizens of Dillon still miss those cinnamon rolls! In my retired life, I still love to bake (but don't), quilt and do other crafty things, and hang out and do canine scent work with our Springer Spaniel, Quimby.

Bruce and I enjoy getting together with other Clans at Games and Gatherings, and meeting others with the same interest in promoting Scottish culture. We have 3 grown daughters, 3 great sons-in-law, 4 grandchildren and one great-grand.